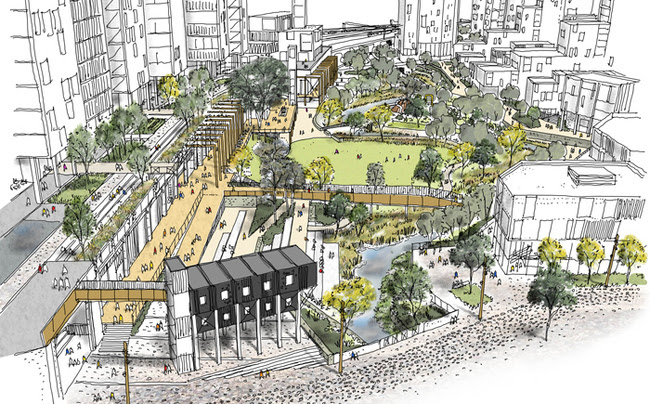 The framework outlines the development principles the partnership will pursue to deliver its vision of creating “a world-class, transformational, distinctive and imaginative commercially-led neighbourhood, anchored by Mayfield Park, which will become a powerhouse of socio-economic productivity”.

Mayfield is a 30-acre site next to Manchester Piccadilly station. The partnership’s masterplan is for Mayfield to become a distinctive new urban quarter, delivering 1,500 homes, circa 1.6m sq ft (155,000 sq m) of offices, two hotels comprising 650 beds, 330,000 sq ft (33,200 sq m) of retail and leisure facilities and a city park over the next decade.

The masterplan proposes a significant increase in both the residential and offices suggested in the initial Studio Egret West 2014 indicative masterplan. The homes will comprise a mix of sizes and tenure, to “create a diverse and inclusive neighbourhood, in a new and vibrant district close to the heart of the city centre, with considerable green space and local community amenities”. 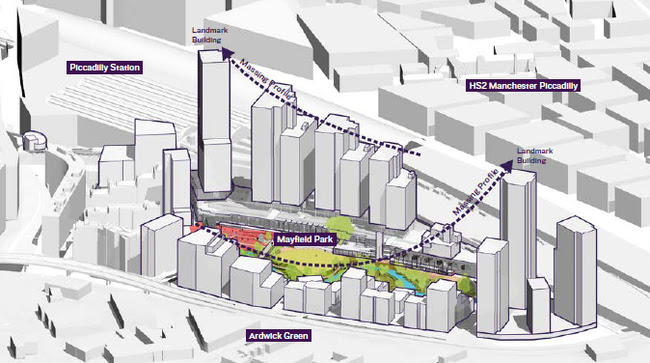 The retention of the Mayfield Depot is another key alteration to the 2014 SRF. This encompasses the reworking of the ticket office, the grand columned volumes of the depot, the Temperance Street arches and the railway platforms above, with the potential to create an elevated park.

Key to the discussions of how the 2018 SRF should be laid out has been the mix of uses and typologies.

The scheme proposes two landmark buildings located at the two key gateways to the site, above the old ticket hall and at the east end of the park, to mark the arrival to the Mayfield area. These taller buildings will be visible both to pedestrians within the city, acting as guiding landmarks, and for spectators looking back at the city from afar. They will clearly mark the arrival to Piccadilly Station for passengers on the mainline railway.

The partners are also proposing that along the northern edge and to the east, buildings conform to a two-tiered approach to height and massing a low level podium with taller elements perched atop. The lower level podiums at ground are provided by the retained Mayfield Depot to the north and a proposed new podium structure at Hoyle Street East and the MacDonald site.

The partners have suggested five neighbourhoods in the indicative masterplan.

The Mayfield Depot: The depot is located in close proximity to Piccadilly Station and the partners suggest it is the ideal location for a retail, leisure, culture and business destination that takes advantage of the depot’s expansive interior and its location right on the doorstep of the park. There is a potential to subdivide the depot into smaller units at ground and mezzanine level, or to retain the large open spaces for flexible use, such as exhibitions, food markets or events. The buildings above the depot have robust and generic floorplates that provide flexible grade A office spaces. The landmark building above the old ticket office has a slimmer profile and a smaller footprint that is tailored for hotel and residential use.

Baring Street Campus: Four low to medium rise buildings provide large, generic and flexible commercial floorspace along with some residential accommodation. The riverside building has a smaller floorplate that could host a more external facing use fronting onto the public river walkway.

Hoyle Street East: This is a residential led mixed use area that also provides complementary nonresidential uses at park and street level. Hoyle Street East continues the sweep of active uses located along Fairfield Street and Temperance Street that together serve to activate the streets and provide points of interest around the park. Above the podium is a high rise cluster of apartment buildings, providing a significant proportion of the proposed residential development on the site.

Hoyle Street West: South of the park in a quieter part of the site lies this low to medium rise family orientated neighbourhood with apartments and family houses or stacked duplexes. Commercial space is distributed across the smaller units along the Mancunian Way frontage.

Wyre Street: A collection of new buildings will help consolidate the currently fractured urban grain west of Baring Street. The existing Baring Street brick building opposite the Gatehouse will be replaced with a new hotel of a similar footprint but increased height to that of the existing building. A generous and generic building floorplate is located on the current MacDonald surface car park, providing a range of retail and leisure uses at ground, and office uses at upper levels. A small and welcoming pavilion sits at the Wyre Street entrance on Fairfield Street, providing leisure and/or retail uses within an enhanced landscape setting. The Wyre Street area will be directly accessible from Piccadilly Station via the new southern entrance.

If adopted by Manchester City Council, the SRF will guide the site’s development by setting a vision and key design parameters which will become a material consideration for decisions on future detailed planning applications.

The 2018 Mayfield SRF has therefore been developed alongside a revised 2018 Piccadilly SRF, to ensure that strategic regeneration continues to be planned holistically and that opportunities and linkages are maximised. The revised Piccadilly SRF is due to be presented to the council’s Executive in March 2018.

Members of the public can have their say on the proposals and at a series of public exhibitions at the site and at other city locations.

The draft SRF identifies five distinctive neighbourhoods clustered around a major public park for the city centre. The park, which will straddle the banks of the River Medlock and run for almost the entire length of the site, covers 6.5 acres in total.

It also details the retention of the main historic buildings on the site. These include: the Mayfield Station including its platforms, the Mayfield Depot and the associated railway arches which form the Partnership’s boundary along Temperance Street.

James Heather, development director at U+I, said: “We are very pleased to have reached the stage where we can put our proposed vision of a new Mayfield before the people of the city. In the 12 months or so since we were appointed as development partners, we’ve found a huge interest in the site from the public and this is their opportunity to respond and to tell us what they think of our plans.

“This is a key moment in the next chapter for Mayfield and we are sure the people of the city will be interested to see how far we’ve come.”

U+I was picked as the development partner for the £850m scheme in September 2016 from a shortlist which also included Urban & Civic and a consortium formed by the now defunct Carillion, Ask and Patrizia.

U+I’s appointment came exactly a year after the consortium launched a search for a new partner to lead the comprehensive regeneration of the site adjacent to Piccadilly Station, which has lain derelict for over a decade.

The draft Framework was approved for consultation by Manchester City Council’s Executive on 7 February. A period of formal public consultation has now begun. Following this consultation, an updated document, incorporating comments from the public, will be presented to the Executive later in the year for consideration for final adoption.